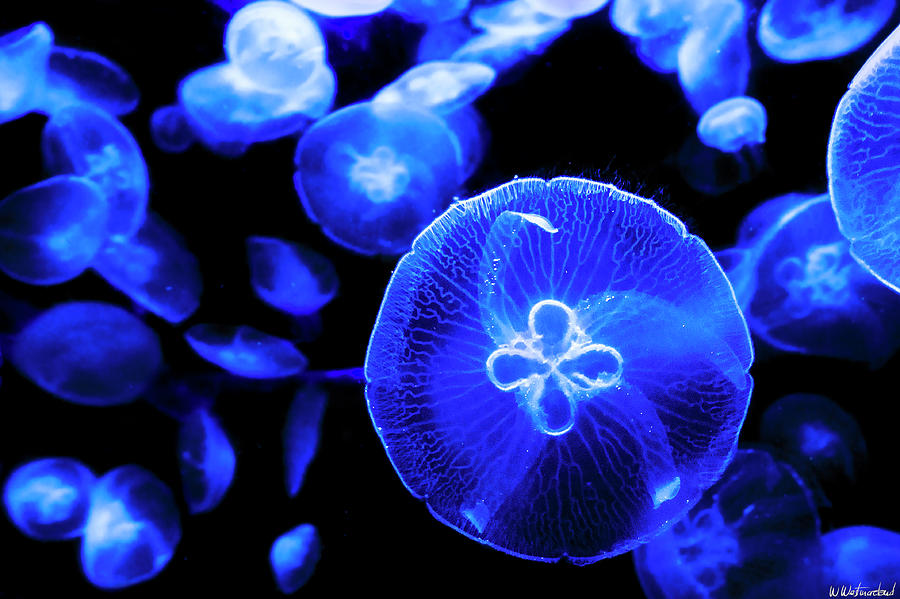 Funny we consider these quiet and peaceful creatures carbon based life, when they are 95% water. I remember we used to take them out of the water when we were kids and leave them to dry in the sun. They would vanish in no time, leaving just a purple-reddish circle on the rocks. I always thought about them as living water. Mostly :)

The moon jelly is translucent, usually 10–16 inches in diameter, and can be recognized by its four horseshoe-shaped gonads, easily seen through the top of the bell. It feeds by collecting medusae, plankton, and mollusks with its tentacles, and bringing them into its body for digestion.

Aurelia aurita has very limited ability to move where it would like to. Current and wind take it from one location to the next. They seldom use their energy to swim around. This is why they like water with constant currents.

A sting from a Moon Jellyfish may hurt but it often passes unnoticed by humans. On the worst cases there is some pain and a small rash. However, many people don’t even know they have been stung because they don’t penetrate well through skin.

A mostly harmless and peaceful creature with hypnotically soothing powers when stared at without prejudice.


You can learn more about what drives me in my blog: