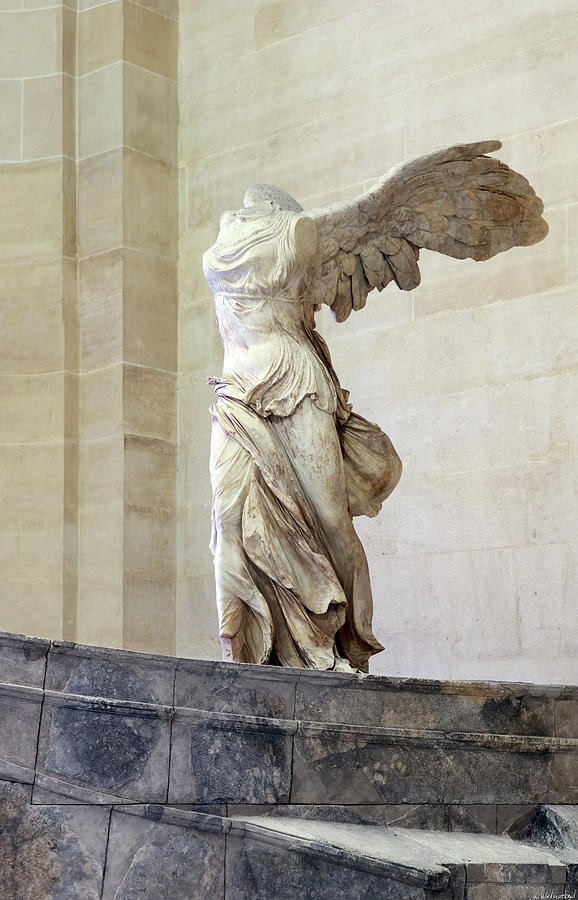 The Victory of Samothrace, or Nike of Samothrace, is a Greek marble sculpture of Nike (goddess of victory), that was probably created around the 2nd century BC. Although we don't know when it was carved, by whom, or to commemorate what, it is certainly one of the most celebrated sculptures in the world and one of the few original major Hellenistic statues that have reached our times (we do have amazing Roman copies of many, but the Greek originals are actually scarce).

The goddess is missing both arms, both feet, her head and only her left wing is original, while the right is a mirrored copy. Nevertheless, this sculpture is one of the most powerful surviving masterpieces of the Hellenistic culture. Or any culture.

The Nike appears on top of a huge pedestal in the shape of a Greek warship prow. She has been caught in the precise moment of landing there, the balls of her slim right foot barely touching the deck while she faces the strong sea winds that blow her fine chiton backwards and against her body. Its the goddess of victory arriving in the moment of a naval triumph.

Maybe you won't consciously tell all this nuances, but your subconscious will catch them right away and fill your soul with a hardly describable sense of power and awe. Wonderful.

As often happens with countless fascinating sculptures of the past, one is later overcome by a sense of yearning and frustration for the impossibility of traveling in time and admiring this beauty in its full splendor of yesteryear...